There hadn’t been any traffic on the way to the eclipse viewing site in Albany, and there weren’t that many people at Linn Benton Community College. We even stopped by

Izzy’s to eat with hopes of bumper-to-bumper cars to dissipate. That didn’t happen.

Before we had gone far, this BMW was on our tail.  It’s amazing

what a camera lens can do to motivate a driver to back off, though from the looks of it, the driver was looking at something other than the road or us.

Now, this idiot not only passed us while we had a solid line, but his leap-frogging got him in a long line of cars. I felt bad for the driver in the van, probably someone doing their job and got caught in the throes of cars. The bicyclist beat us all home. 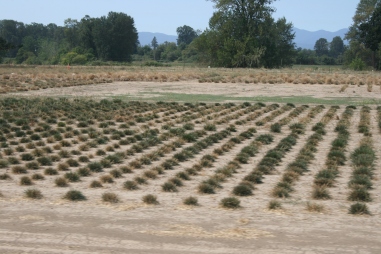 I turned my attention to the crops on the side of the road. Sometimes things are marked. Mint. Rye grass. But I haven’t the slightest idea what these little tufts, neatly organized in rows, marked with flags.

We were not going very far very fast. The guy who passed us was probably fuming. Perhaps he wasn’t an eclipse adventurer and just got caught up in the mess.

The cars snaked their way along 99 for as far as I could see.

In terms of seeing, we had gotten very lucky for that short two hour window of watching the eclipse. Between the forest fires and the field work going on, the sky was very hazy. Oh, there was the exhaust as well. I hadn’t thought about the global damage we were all doing trying to inch our way home.

Not being in any rush, we opted to turn off and go a different direction from the masses.

We weren’t the only ones who opted to take the back roads from the back road. GPS must have directed the Californians off the beaten path. There were at least three CA plates for every Oregon plate.

It didn’t matter where we turned, there was congestion.

Three Mennonite women were handing out free lemonade and ice tea. Even had a sign 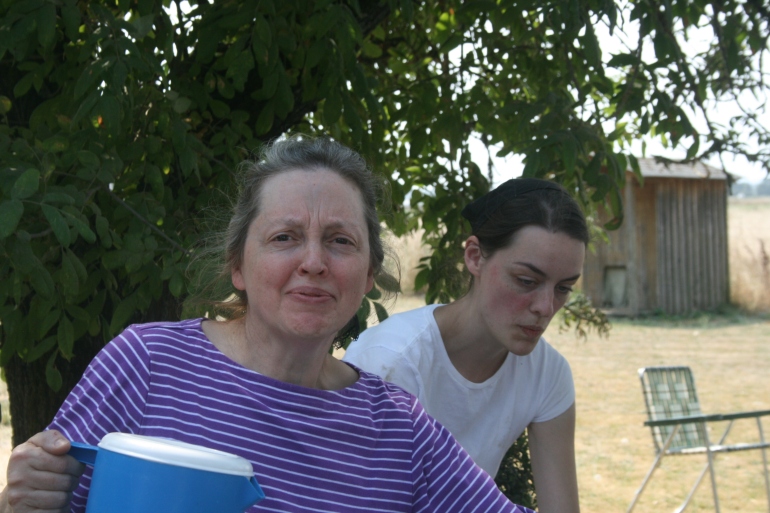 up offering rest room facilities for the masses. The daughter told me that their road is so quite that they hardly ever even look when they back out of the driveway.

It was like being in a parade. A very long parade.

Where were these cars coming from?

By this point, I was looking for anything that would be vaguely interesting. WALKNET? WALKNER? Last name? 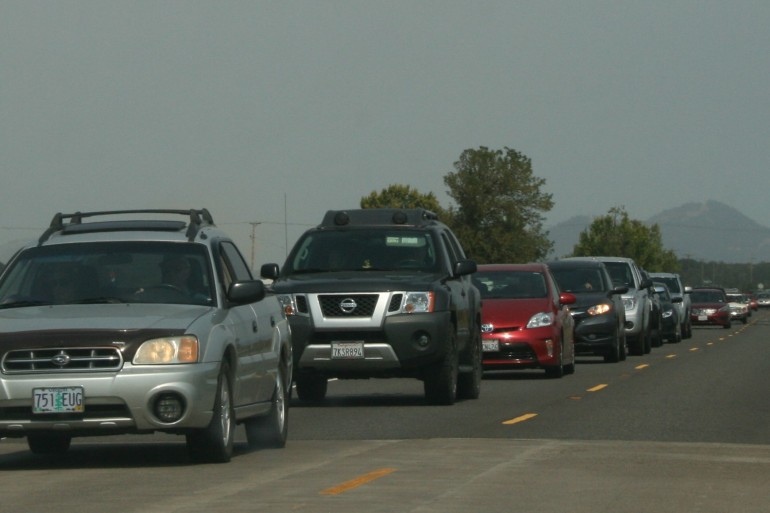 Again, we opted to go against the stream of  traffic, though stream doesn’t describe it. Bog of traffic? To get home quicker, we were going in the opposite direction.

What wasn’t helping the situation was a big event in Brownsville, a very large country music festival that was releasing more traffic into the mix. 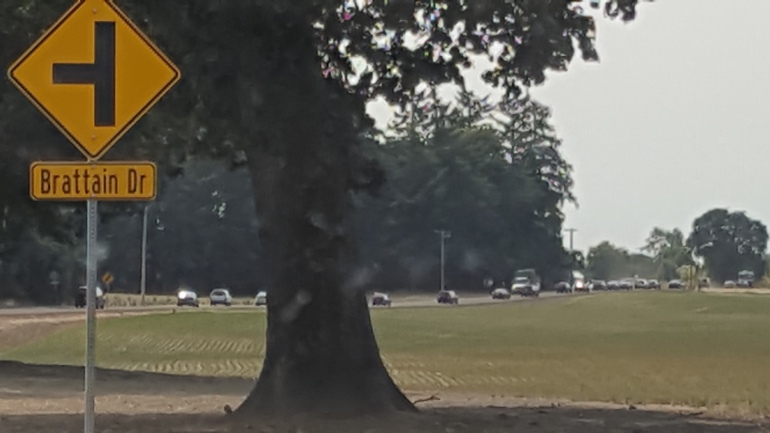 And soon we found ourselves back in a slow-moving queue.

was time to stop. I don’t think I had ever been to Brownsville before, and this seemed like a reasonable place to kill some time. I learned about the politics of Brownsville and how the city has been fighting with Marijuana dispensaries; it was a long fight to get a medical license and were still fighting with the city over recreational use. The woman who talked to me, sure liked to talk, told me that crime statistics went down wherever there were medical dispensaries. Because I don’t have a medical card, I wasn’t allowed to see what they had to offer. 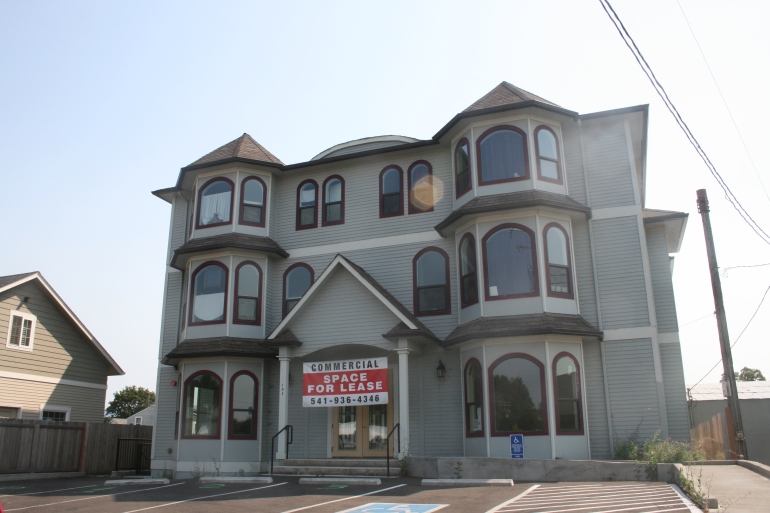 Interesting place to rent in Brownsville. 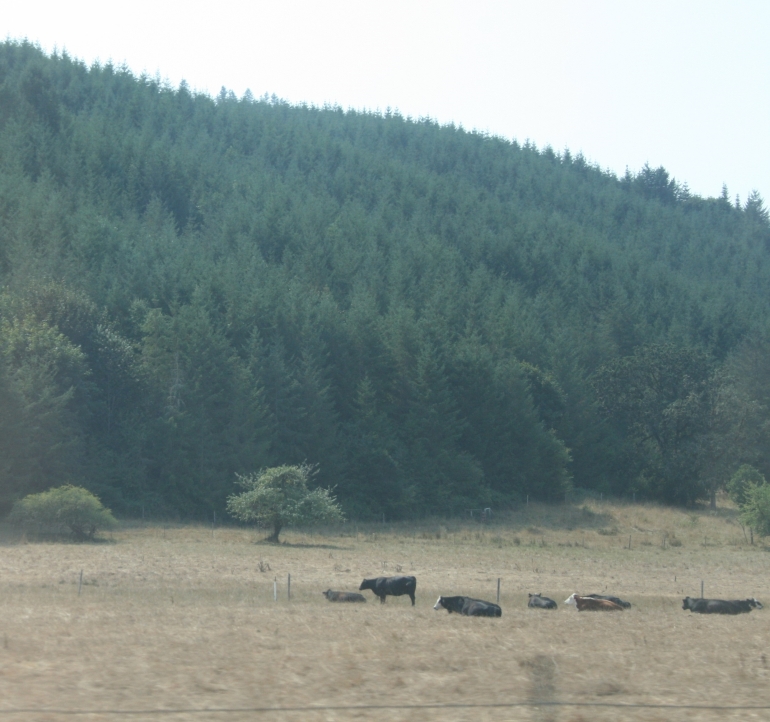 Even the cows were bored.

From Brownsville, we went towards Marcola; the only thing that was slowing us down at this point were the Californians who weren’t used to curves. Every time Sylvia tried to

pass on straightaways, they sped up and wouldn’t let her pass. 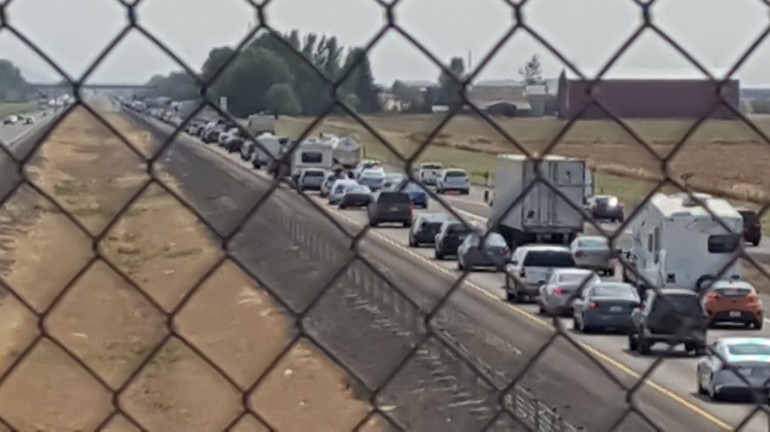 We were very glad that we didn’t try to take I-5. South bound was ridiculous.

It took us three hours to get home. Would I do this again? Yes, though perhaps putting up a tent and staying another night might have been the wisest move.

Meanwhile, the sun kept me entertained from the beginning to the day until the very end, though this picture really didn’t capture the glory of the sunset.