Street. Hiatus on 53rd street in Portland. When I packed my bags Friday night, I took enough clothes to cover me until Monday. It’s Tuesday. An inkling whispers to me about the Sylvia, the dogs, and the cats. But there is also a gentle inkling is reassuring me that it’s okay to Take Care of Me. Exhaustion sits on me like a house. I always suspected I was the Wicked Witch of the West in a previous life. Maybe I’ve come down with something and it’s not all about the bowling weekend that wiped me out, but maybe it is.

The days where I practiced and felt success, hope was building. Saturday hope was Eternal. The bowling Gods were not always messing with us; there were glimmers where I felt right with the world and what I was doing. The only dichotomy that was getting in the way was how beautiful the day was out in the parking lot. For one that spends times in the woods on a daily basis, to have the dark cramped bowling alley and the parking lot as my only backdrops couldn’t have been good for my spirit.

On Saturday, for most of the day, out in the parking lot, I listened to bag pipe music. Music from next door. Some kind of festival perhaps. I never did figure out the purpose for live bag pipe music on a Saturday. Is that Milwaukie, Oregon for you? I don’t know much about that little city.

In reflection, the  difference in investing money and coming back home with dividends and the feeling of achievement than spending a lot of money and coming home with an empty wallet and the  feeling of disappointment has a canyon between those camps. Since I tend to dump as much upon myself as possible, I think about the four women I let down. I don’t feel quite as bad when I blow it for myself, but being a deficit on the team kicks me in the  gut. Doing horrible in a singles tournament used to cause me to dust my butt off, accept my need of work, and  get to it. I’m wondering if I have that little kick inside to do that this time. My back is telling me no, but I’m not sure I want to listen. I like to think that my back can’t get any worse and won’t get any better, so why not, but I don’t know if that’s true. I certainly don’t want to be looking back twenty years from now and wishing I hadn’t pushed myself. I just don’t know.

This is the second time I have visited my nephew Aaron and my niece-in-law Kristin. I love it here and enjoy spending time with family. Since I moved away when Birdie was three or four, our paths have not crossed many times in his thirty-three years. My sister was visiting during my initial visit.

And then there’s luscious Lucas, my great-nephew.

What an amazing little therapy dog. The only time he really says anything is when someone returns, and then he acts like he’s not seen you in years, maybe eons. I gather that dogs don’t have a sense of time, so any time of separation feels like an eternity to them.

Sometimes I think that when a dog stares at the door, at the place you disappeared out of, when they see you return, it’s as if they have visualized you coming home, and maybe think they made you materialize through their thoughts. If I wished for her to come home, even though it took hours, it still happened because of that, and if it worked once, it’s might work again.

This  goes for sounds as well. When I come home, regardless of day or night, Abby is always at the gate waiting by the time I drive in. Doesn’t matter if I’m in the Mini or the Subaru. She’s the only one that does this, and then she  gets to ride in the car all the way from the gate to the parking spot. Fantastic reward for Abby. I think she would even perceive sitting in the car in the driveway a reward, as long as I am in the car with her.

Thoughts of a Dog when we’re not home. I believe that dogs can grown beyond the Out-of-Sight, Out of Mind” stage of conceptualizing ideas. Abby knows that I’m hiding a toy behind my back. Sometimes Lucy has those moments, but mostly she just doesn’t care that it’s there. She’ll get it eventually.  When I leave, my dogs know I’m gone, but they don’t have the ability to imagine where I’d be. There’s no, “she must be at work or at the store.” Abby can’t resist trying to find me when I am gone. Sylvia can’t leave her in the yard after I’m gone. Abby will scale the fence and search for me. Thankfully our neighbors are vigilant and keep her safe until we can come and get the little brat.

My time on 53rd Street in Portland has been so nice and gentle and open. Hanging out with Luke and Lloyd while A & K or K & A are out and about with school and work has been soothing. Plenty of Reflection Time to sort. Being out of the country, my senses are going in so many directions with all of the city chaos and mayhem. But sometimes commotion causes the peace and quiet to seem all that more quiet. The Lull after the Storm. Sirens are more often and closer. Neighborhood dogs have picked up on the siren

and are singing. I tried to get Lucas to do some baying or howling, but he looked at me as if I were mad.

In a way, the not so distant traffic sound like the ocean, there’s a calm to the hushing sound. I don’t feel this way when I have to cross four lanes of traffic. Pausing in-between. Playing Live Froggie. Luke’s always with me, so precaution causes taking my time and waiting until the coast is extremely clear. But mostly I’ve been avoiding that aspect of fifty-third by walking the side streets.

I’ve only tripped twice walking around the blocks, and it was in the same place. My shuffling feet, my Tim Conway Old Man routine, caused the slight trip. I almost expected the trip the  second time And the weather. Summer has arrived. Shorts and Tees. I did, however, m 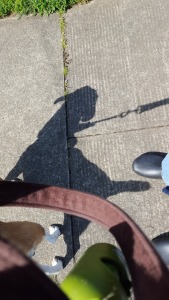 eet a woman on the street, she stopped Kristin to ask for a cigarette, and she was wearing a parka. K, L, and I  were sweating. I imagined that perhaps she was wearing all that she possessed and didn’t have a place to hang it.

On my daily walks at home, I’m not reminded of the homeless. Driving around Eugene, I’m reminded when I read the cardboard signs on major corners.

I think about the bowling balls in my car. The money it took to get to Portland, to enter the tournament, the food, and it’s so easy for me to take it for granted. It helps me to extinguish the “I Want More” out of my daily life and think about how so much more that I have than a lot of people. And I’m disappointed over a silly bowling tournament and the worst wound was that to my ego. Does my ego have to be attached to competition?

If I had focused on the trash in the city, I would have seen a lot of trash, but on my walk around the blocks, I discovered beauty. Manicured yards. Well-loved yards. I’ve been racking my brains to remember if I have ever trimmed hedges. It’s only slightly tempting to add onto m

y every-growing Bucket List. I didn’t start creating a list until this year. I’d be an idiot if I tried to say that I am not sure how this came about to be. In five years, the difference in doubling my age has exponentially grown. A hundred versus a hundred and twelve. I have never met or perhaps even heard of a one hundred and  twelve-year-old.